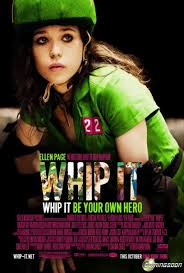 The text is the story of Noah’s Ark, found in Genesis 6-9.

Has anyone here ever been to a roller derby bout?  It’s quite an experience.  Two teams on roller skates chase each other around an elliptical track.  Unlike most American sports, there’s no ball or puck involved.  Certain players, called ‘Jammers’, score points by passing other players without getting knocked down.  It’s a high-energy, full-contact sport with its own quirky sense of humor that makes for really fun viewing.  Explaining all the rules would take more time than I have for this sermon.  If you ever want to check it out for yourself, there’s a local organization that supports multiple teams from our area.  My wife and I are particularly fond of rooting for the Rome Wreckers and the Utica Clubbers whenever we get the chance.

We became roller derby fans a few years ago after seeing a movie called Whip It starring Ellen Page and Drew Barrymore.  Whip It is the story of a young girl named Bliss Cavendar who is somewhat lacking in the self-esteem department.  That changes once she discovers roller derby and joins her local team (which is somewhat lacking in the winning department).  Going by the nickname “Babe Ruthless”, Bliss finds out that she’s actually pretty good on roller skates.  I could keep going, but I don’t want to spoil the movie for those who might see it.  It’s worth a rental and it gives you a fun introduction to roller derby.

Whip It is a classic underdog story.  It’s all about finding confidence, embracing who you are, and following your dreams until they get you somewhere.  Who doesn’t love rooting for the underdog?  We do it in Star Wars and Harry Potter.  We do it in history class every time we read about the American Revolution.  We even do it in the Bible.

This morning, we read from the story of Noah’s Ark in Genesis, which is one of the most well-known (and strange) underdog stories in the entire Bible.  This story can be found in the sacred texts of Judaism, Christianity, and Islam.  Our Muslim neighbors regard Noah as one of their great prophets along with Muhammad, Adam, Moses, and Jesus.

Even people who haven’t been to church, synagogue, or mosque are somewhat familiar with the story.  God tells Noah to build an ark (a fancy word that really just means “box”) because a flood is coming that will engulf the whole earth.  Noah builds, the flood comes, lives are saved, the ark lands, and a rainbow appears.  That’s the story in brief.

Before I get into looking at Noah himself, there are a few things I should clear up about this story.  First of all, a lot of people have trouble believing in a God who would commit such large-scale genocide against so many people, plants, and animals.  Why should anyone worship that kind of deity?  If any human president did that, they would be tried for “crimes against humanity”!  Well, it might help you to know in this case that the almighty Yahweh would probably be acquitted based on the evidence at hand.  There is no scientific evidence that a great flood has covered the entire world in the last five thousand years.  Like our earlier stories from the Garden of Eden, it seems that the story of Noah’s Ark contains little (if any) historical fact.  So we can all rest easy.  The God we worship never actually killed the majority of the human race in a great flood.  We can let God off the hook for that one and focus instead on what’s happening in the story itself.  There is truth to be found here, even in the absence of scientific and historical fact.

It’s no accident that a flood is what overtakes human civilization in this story.  Do you remember way back in Genesis 1, which we read several weeks ago?  That story opened with the image of a dark and stormy ocean.  To the ancient Hebrews, the sea was a symbol of chaos.  To them it represented all the random and dangerous parts of the world that worked against God’s will in the world.  It’s the raw material of creation that God shapes into various useful environments and creatures.  So it’s highly symbolic that, when the hearts of humanity become filled with violence and evil, the sea (a symbol for chaos) overtakes the cultivated and “civilized” land.  The flood represented more than just a natural disaster; it was the undoing of creation itself.

That being said, let’s look at Noah himself.  He’s a guy with a pretty weird dream.  He’s building a boat in the middle of the desert.  He says that rain is coming but there isn’t a cloud in the sky.  Jewish and Muslim embellishments on this story spend a lot more time describing the kind of ridicule that Noah experienced because of his faith in God (and the ark project).  But Noah the underdog holds fast onto his dream and keeps building.  Unlike Noah’s neighbors, we (the readers) know why he’s acting so strange.  He’s building the ark because he’s heard God’s voice.  Noah is dreaming God’s dream.

We don’t know exactly how Noah heard God’s voice.  Maybe it came through a literal dream or vision.  Maybe it came down like a voice over a loudspeaker through a part in the clouds.  Maybe he just had a kind of “holy hunch” about what was about to happen.  The text doesn’t tell us exactly how he heard it.  All we really know is that Noah listened and acted.

Personally, I like to imagine the last option being the way that Noah heard God’s voice.  I like to imagine that he looked around at his society and saw the forces of chaos and violence threatening to overwhelm his fellow human beings.  Disturbed by what he sees, Noah acts on a hunch and works quickly to preserve life as best as he can, in spite of the abuse heaped upon him by his neighbors.

The amazing thing is that, not only does God inspire the dream, but God also provides for the completion of Noah’s dream.  In spite of all odds being stacked against him, Noah’s little lifeboat project survives a watery Armageddon and lands safely to begin a new world.

This seems to bear a lot of similarities to the ways in which people tend to hear “God’s voice” in our own society.  Brave people of faith step out, based on a “holy hunch”, often against impossible odds, and make a real difference in their world.  Knowingly or unknowingly, these prophets are the ones who are dreaming God’s dream.

Martin Luther King, Jr. caught onto this when he dreamed out loud “that one day my children will live in a world where they will be judged, not by the color of their skin, but by the content of their character.”  People told him the end of segregation was impossible in the south, but forty years later, God is still seeing that dream through.

During the Great Depression in New York City, a man named Peter Maurin and a woman named Dorothy Day were greatly disturbed by the poverty they saw in the city around them.  Dorothy and Peter were especially troubled that most of the people on the unemployment line believed that the church had no good news for the poor.  As a result, Dorothy and Peter started publishing a newspaper called The Catholic Worker that aimed to teach people about the social teachings of Christianity.  In addition to publishing the paper, Dorothy opened up her own apartment to homeless people and fed hundreds of people every day from a soup and bread line.  Peter Maurin commented on their little project, “We are bring forth a new world from the ashes of the old.”

Isn’t that exactly what Noah was doing?  “Bringing forth a new world from the ashes of the old.”  Preserving life in the midst of rising chaos.  Peter and Dorothy were also dreaming God’s dream.  As the economy collapsed around them, they reached out with a creative vision for preserving life in the midst of chaos.  They built an “ark” in their own way.  Even though both of them are long gone, their newspaper is still being published today.  Poor people in New York City can still get soup and bread every day from their “house of hospitality”.  Similar houses, inspired by Peter and Dorothy’s example, have since opened up in big cities all over the world.

When you look around at our society today, where do you see the forces of violence and chaos wreaking havoc?  What injustice and inequality threatens the essence of life?  Do you have a “holy hunch” about some way to respond to this injustice?

We live in an age when media pundits of all ideological stripes shout their opinions louder and louder over each other.  Eventually, their angry words become part of the larger and louder chaotic chorus around them.  They all have something to say about what other people should be doing, but so few of them get up and do something themselves.  So, my question to you is: what do you sense God calling YOU to do?  What evidence of violence or chaos do you see?  What kind of wild idea or hunch do you have for somehow preserving life in the midst of that chaos?

Answer this question, and you’ll be dreaming God’s dream too.  Your holy hunch might sound like just another crazy underdog idea.  People might ridicule you for it, but if you make a leap of faith, I think you’ll find God working miracles to see this dream through to its fulfillment.

God loves a good underdog story.  Incidentally, so do I.  I’d love to hear your wild and crazy ideas about doing real ministry in our little church.  We might not be the biggest, richest, or most powerful act in town, but if we step out in faith while dreaming God’s dreams, I believe that we, like Noah, can expect to see some miraculous things happening that we never would have thought possible.

So, I leave you with these words from the classic rock band Aerosmith: “Dream on!”

One thought on “Life in the Midst of Chaos: Underdogs, Roller Derby, and Noah’s Ark”