A Great Cloud of Witnesses 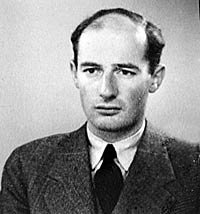 Raoul Wallenberg (August 4, 1912 – July 17, 1947?) was a Swedish humanitarian who worked in Budapest, Hungary, during World War II to rescue Jews from the Holocaust. Between July and December 1944, he issued protective passports and housed Jews, saving tens of…

One thought on “Jul 16 – “The Righteous Gentiles””