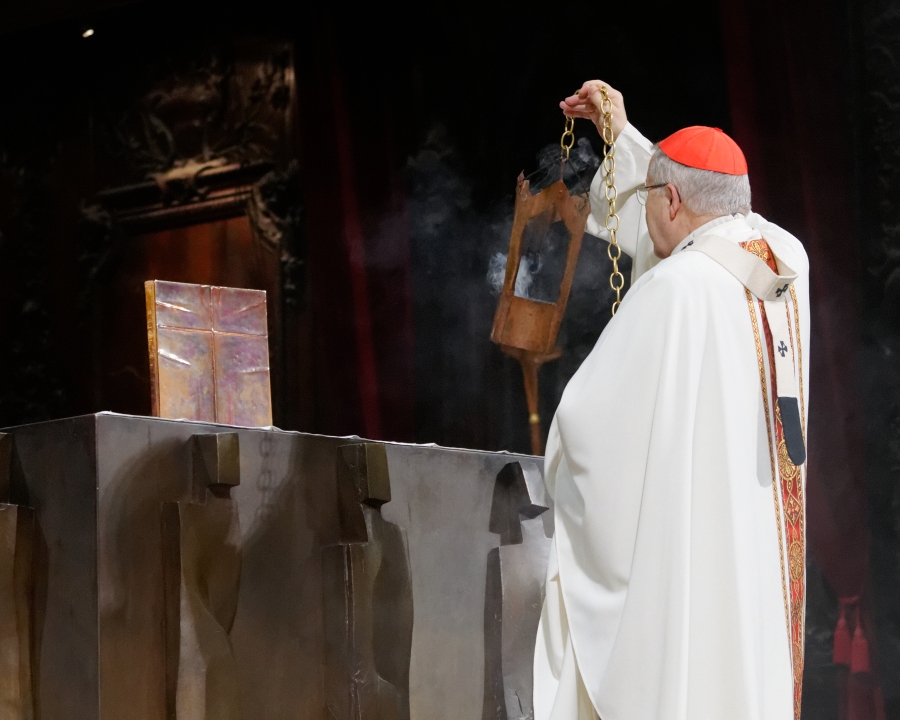 I love that 70s song by Edwin Starr that goes:

“WAR! What is it good for? Absolutely nothing!”

I think that’s a great question to ask: What is it good for?

It’s a question I think we could easily ask of ourselves, simply by changing the first word:

Church… Faith… Prayer… Worship… What is it good for?

There are many who have asked that very question over the centuries, and not a few of them have come back with the same answer: Absolutely nothing!

Historically, one well-known philosopher who asked that question (and came up with the same answer) is Karl Marx, who co-wrote the Communist Manifesto in 1848. He wrote, quite famously:

“Religion is the sigh of the oppressed creature, the heart of a heartless world, and the soul of soulless conditions. It is the opium of the people.”

“Those who toil and live in want all their lives are taught by religion to be submissive and patient while here on earth, and to take comfort in the hope of a heavenly reward. But those who live by the labour of others are taught by religion to practise charity while on earth, thus offering them a very cheap way of justifying their entire existence as exploiters and selling them at a moderate price tickets to well-being in heaven. Religion is opium for the people. Religion is a sort of spiritual booze, in which the slaves of capital drown their human image, their demand for a life more or less worthy of man.”

More recently, a group of three, young, Christian pastors have written a book called Never Pray Again: Lift Your Head, Unfold Your Hands, and Get To Work. In this book, they say:

For many people, Christian discipleship is sleepwalking. We inhabit a world of dreams and imagination, of theology and interpretation, of jargon and tradition. Worship services follow the same pattern week after week, and we can just coast through. Christian leaders can, and do, phone it in. We stand, we sit, some of us kneel, we turn to face the cross, we bow our heads, we take a morsel of bread and a sip from a cup, and we proclaim our work done.

Now, what each of these authors is trying to say is that any religion, any church, or any spiritual practice that does not lead humanity toward a transformed world is good for absolutely nothing. That kind of religion is like a drug: it makes people feel good by numbing them to the pain of the world. People use that kind of faith as an escape. It’s a drug and it’s good for absolutely nothing. Marx and Lenin would say that it’s better to have no faith at all. And I agree with them… to a point.

I would say “Yes” to Marx and Lenin because the kind of religion we learn from Jesus, the prophets, and the apostles is firmly based in God’s desire for a world that has been transformed for good. Nowhere in orthodox Christian theology do we find the notion that God doesn’t care about this world.

Instead, we hear God say through the prophet Amos:

I hate, I despise your festivals,
and I take no delight in your solemn assemblies.
Even though you offer me your burnt offerings and grain offerings,
I will not accept them;
and the offerings of well-being of your fatted animals
I will not look upon.
Take away from me the noise of your songs;
I will not listen to the melody of your harps.
But let justice roll down like waters,
and righteousness like an ever-flowing stream.

In other words, God is sick and tired of their religion and wants them to work for justice instead. This is a profoundly biblical idea. Likewise, God says through the prophet Isaiah:

Announce to my people their rebellion,
to the house of Jacob their sins.
Yet day after day they seek me
and delight to know my ways,
as if they were a nation that practiced righteousness
and did not forsake the ordinance of their God;
they ask of me righteous judgments,
they delight to draw near to God.
“Why do we fast, but you do not see?
Why humble ourselves, but you do not notice?”
Look, you serve your own interest on your fast day,
and oppress all your workers.
Look, you fast only to quarrel and to fight
and to strike with a wicked fist.
Such fasting as you do today
will not make your voice heard on high.

In the Epistle of James in the New Testament, the apostle writes:

What good is it, my brothers and sisters, if you say you have faith but do not have works? Can faith save you? If a brother or sister is naked and lacks daily food, and one of you says to them, “Go in peace; keep warm and eat your fill,” and yet you do not supply their bodily needs, what is the good of that? So faith by itself, if it has no works, is dead.

So, this is where I say “Yes” to Lenin and Marx. If our Christian faith is just a way for us to escape the pain of life instead of working to make this world a better place, then our faith is just a drug that’s good for absolutely nothing. Better to have no faith at all, than that kind of faith.

However, my “Yes” to Marx and Lenin is not unqualified. It’s a “Yes, but…”

Yes, “faith without works is dead,” but empty escapism is not all there is to Christianity. As we have already observed, the core message of both Testaments in the Bible is the God who is “making all things new” in Christ. God’s dream is for “a new heaven and a new earth” and God has invited you and I to help make that dream come true by living our lives as “the hands and feet of Jesus” on earth today. The fact that some Christians have distorted or forgotten that fact does not negate its truth one iota. The solution to bad Christianity is not no Christianity, but better Christianity. That’s where Marx and Lenin go wrong.

In this morning’s gospel, Mary of Bethany, that wonderful mother of all contemplative saints, performs an extravagant act of beauty and service for Jesus. The text tells us she “took a pound of costly perfume made of pure nard, anointed Jesus’ feet, and wiped them with her hair. The house was filled with the fragrance of the perfume.” We soon find out that this perfume was worth almost a year’s salary for the average working person.

Judas Iscariot, ever the practical Marxist, laments, “Why was this perfume not sold for three hundred denarii and the money given to the poor?” (NOTE: Of course, we also learn in the next sentence that Judas’ motive for saying this was somewhat less than pure.)

Judas saw Mary’s act of worship as nothing more than a giant waste of resources. Many critics continue to accuse Christians of the same thing today.

Why do we get up and go to church on Sunday? Wouldn’t it be better to spend that time volunteering at a soup kitchen or homeless shelter? Why wake up early for prayer and Bible study before work? Do we think our prayers will magically come true like wishes upon a star? Why practice Christian spirituality at all? Why not just work hard as an activist, fighting for peace and justice? Like Mary’s anointing of Jesus, isn’t it all just a big waste of precious resources?

The biblical text tells us that, after Mary had broken open this expensive jar and anointed Jesus with its contents, “The house was filled with the fragrance of the perfume.”

In other words, the act of worship transformed the place where it happened and, by extension, the people who witnessed it. Even Judas was affected.

In the same way, our worship transforms us. It empowers us to do the work of being the hands and feet of Jesus in the world. Without being taught by the Word of God in Scripture, it never would have occurred to us to look for the presence of Christ in “the least of these” and serve them as if they were Christ himself (as indeed they are, as Christ said). Without being fed by the Sacrament of the Body and Blood of Christ, it never would have occurred to us that our broken and suffering neighbors are actually our brothers and sisters, fellow members of the Body of Christ, who eat from the same bread and drink from the same cup as us. Without the experience of dying and rising with Christ in the Sacrament of Baptism, we would not have the courage to face death and risk our lives for the sake of what we believe is right. But we have all these lessons because we have received them through the symbols, myths, and rituals of the Christian tradition. These tools shape us, so that we can then go out and shape the world. Without them, many of us would be utterly incapable of making a positive difference.

That’s what St. Mary of Bethany understood and the Communists didn’t. Worship makes a difference. Marx and Lenin were right that faith is worthless if it doesn’t make a difference in way we live our lives in this world. But they were also wrong, because the Spirit-filled worship of God in Word and Sacrament has the power to transform us from the inside out and then send us out into the world, where we can be agents of transformation in the revolutionary coming of the kingdom of God, on earth as it is in heaven.