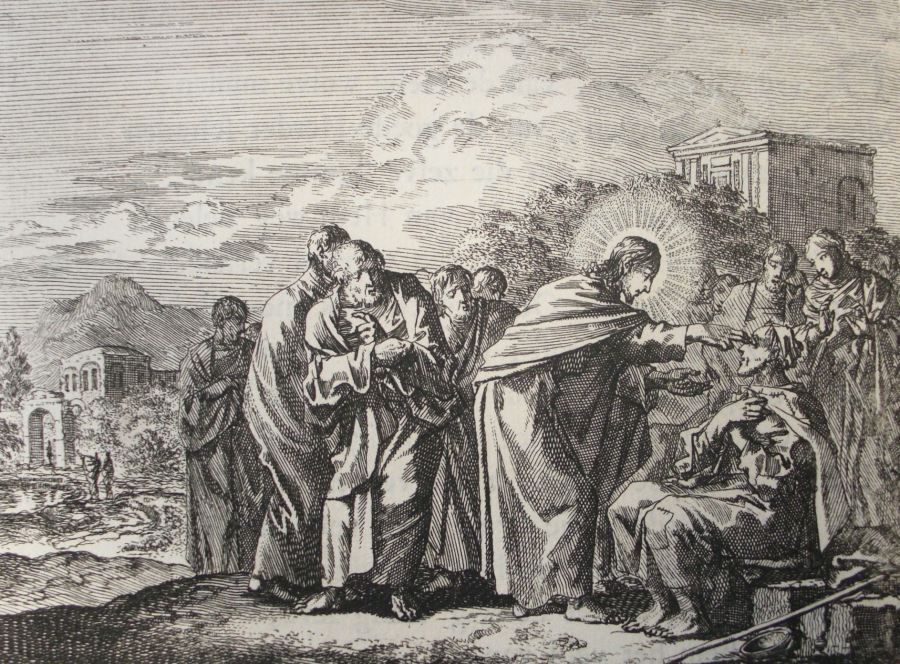 “May the words of my mouth and the meditation of our hearts be acceptable in your sight, O Lord, our rock and our redeemer. Amen.”
-Psalm 19:14

One of the most annoying things about Jesus is that, when you ask him a question, you almost never get the kind of answer you expected.  He has this way of turning questions on their head.  His response tends to shed more light on the person asking the question than it does on the issue at hand.  Such is the case in today’s gospel reading.

The scene opens with Jesus and his disciples encountering a blind man while they are in Jerusalem for a religious holiday.  As they pass by, one of them asks a question that has plagued philosophers for thousands of years:  “What is the nature of suffering and evil?”

This question is especially troubling to those of us who believe in God.  People have come up with all kinds of theories that try to find an answer.  Some suggest that God is loving but not almighty.  In other words, God cares about suffering but cannot do anything about it.  Others say that God is almighty but not loving.  God could solve the world’s problems but just doesn’t care.  Finally, some suggest that God is both loving and almighty, but that all suffering is merely an illusion or a misunderstanding on our part.

For Jews in Jesus’ day, the most common answer was judicial.  They believed that everything happens for a reason.  If someone was happy, healthy, and prosperous, then that person was being blessed and rewarded by God.  If someone was suffering, then that person was being punished for their sins.  This judicial theory is probably what Jesus’ disciples had in mind when they asked, “Rabbi, who sinned, this man or his parents, that he was born blind?”

Even though they had their own pet theory to explain why this person was suffering, it didn’t answer all their questions.  In fact, their pet theory left them with quite a dilemma.  You see, the man in question had been blind from birth.  There was no way he could have violated Jewish law before the onset of his blindness.  Therefore, God was either punishing this person for someone else’s sin or God was punishing this person for a sin that had not yet been committed.  Either way, God comes across as unfair.

Jesus doesn’t resolve this dilemma for them.  He lets it stand out like a hole in the middle of a donut.  He says, “Neither this man nor his parents sinned; he was born blind so that God’s works might be revealed in him.”  Rather than taking a side in this debate, Jesus once again turns the entire question on its head.  He says, in effect, “You’re asking the wrong question.”  His response seems cryptic and mysterious because Jesus is answering the question they should have been asking all along.  He continues, “We must work the works of him who sent me while it is day; night is coming when no one can work.  5As long as I am in the world, I am the light of the world.”

What does that mean?  It means that Jesus is trying to shift their attention.  He’s saying, if you really want to look for God in the midst of these tragic situations, don’t waste your time looking at the cause of the pain; look instead at the response to the pain.  The most important thing, to Jesus, is that we be doing God’s work.  And what’s the very next thing he does?  The text says, “he spat on the ground and made mud with the saliva and spread the mud on the man’s eyes”.  In other words: Jesus got his hands dirty.  While other people were standing around and arguing about philosophy, Jesus was busy healing those who hurt most.

But the scene doesn’t stop there.  The recently-healed blind man quickly became the center of controversy in Jerusalem.  This time, the debate was all about whether Jesus had the proper credentials to work such a miracle.  Witnesses were called while scholars debated back and forth about the issue.  All the while, the healed person is stuck in the middle.  He doesn’t have any answers.  He was probably still using his brand new eyes to figure out the difference between red and blue.  When they push him, he says, “I do not know whether [Jesus] is a sinner. One thing I do know, that though I was blind, now I see.”  He stays true to his experience and simply tells the world what happened to him.

Eventually, it becomes pretty clear to this guy that he is simply a pawn being used in someone else’s religious and political agenda.  What I like best about this guy is his moxy (chutzpah).  Once he realizes what’s going on, he’s not content to play his part and go home.  No, he stands up and gives them a piece of his mind.  In more ways than one, his eyes were open.  Better than anyone else in the room, this “ex-blind man” was seeing things clearly.  So he stands up to this room full of rabbis and tells them off!

Well, these rabbis weren’t used to being spoken to like that!  After hurling a few choice insults about the nature of this man’s parentage, they voted unanimously to kick him out of the synagogue.  He was anathema, excommunicated, dis-fellowshipped, dishonorably discharged, and “don’t let the door hit you in the rump on your way out!”

So, there he was.  His situation seemed hopeless.  For years, he had been excluded from the life of his community because of his disability.  Now, he was kicked out and called a heretic.  What was he supposed to do now?  He probably felt further away from God than ever before.

I love that Jesus decides to show up again at this point in the story.  It says, “Jesus heard that they had driven him out, and… found him”.  Then Jesus affirms what the blind man had suspected all along: that he could “see” better than any of those rabbis and scholars.  In spite of their educated debate over this controversy, they had completely missed the point about what Jesus was doing.  But this blind man got it, and Jesus wanted to make sure that he knew it.  Jesus said, “I came into this world… so that those who do not see may see, and those who do see may become blind.”  Once again, Jesus makes sure that those who fall through the cracks of controversy and debate find their honored place in heaven’s economy.  The pawns become the kings.  The victims become the heroes.  Jesus shows us that these suffering and forgotten people are the ones who matter most to God.

When I am forced to endure hard times in my life, or when I witness tragedy in the lives of others, I do not reach for a book that tries to explain away the problem of pain in philosophical or theological terms. I think instead of these words by the Rev. Fred Rogers, a fellow pastor in the Presbyterian Church, who you may know better as the long-time host of the TV show Mister Rogers’ Neighborhood:

“When I was a boy and I would see scary things in the news, my mother would say to me, “Look for the helpers. You will always find people who are helping.” To this day, especially in times of “disaster,” I remember my mother’s words and I am always comforted by realizing that there are still so many helpers – so many caring people in this world.”

I think Mr. (Rev.) Rogers hits the nail right on the head with this one. When we go looking for God in the midst of suffering, whether it’s our own pain or the tragedy of an entire nation, let’s not get lost in philosophical debate over the causes.  Rather, let’s be the “helpers” who get our hands dirty in the work of healing.

That is, after all, how God responds to us in our suffering. When human beings brought themselves to the point of destruction by turning away from God and each other, God did not abandon us to reap the natural consequences of our sin. Instead, God took on flesh and dwelled among us in the incarnation of Jesus Christ.

Jesus loved us and lived among us, as one of us, healing, forgiving, and restoring lives. Jesus got his hands dirty in the mess of our lives and our world. Even when we resisted his saving efforts to the point of killing him on the cross, Jesus still would not stop loving us. On the third day, he rose from the grave, conquering the power of sin, death, and hell, so that now, we who have been baptized in his name, filled with his Holy Spirit, and fed with his Body and Blood are sent out to get our hands dirty as Jesus’ hands and feet in the world today.

Let us go out to meet the hurting people of this world, not armed with arguments about the nature of evil, but equipped with the power to love and heal this broken world in the name of Jesus Christ our Savior.

“Now to the One who by the power at work within us is able to do far more abundantly than we can ask or imagine, to God be glory in the church and in Christ Jesus to all generations, forever and ever. Amen.”