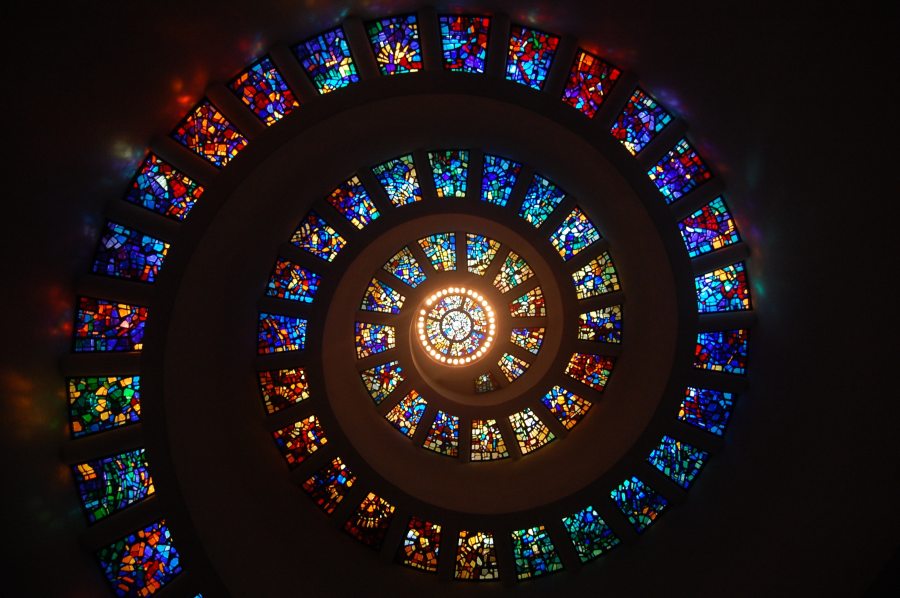 This phrase feels uncomfortable to most religious practitioners in the Judeo-Christian tradition. We have been conditioned to think of the Divine as an all-powerful being who has established unchanging standards of truth and righteousness in the world. Peters, on the other hand, identifies “God” as “the creative process working in our midst.”

Biological evolution happens by mistake. Mutations are copy errors in an organism’s genetic code. Most genetic mutations have a neutral or adverse effect on an organism’s chances for survival, but some of them turn out to be beneficial. When a mutation gives an organism a survival advantage, that error gets incorporated into the genetic code and is more likely to shape future generations.

Cultural evolution happens in much the same way. When Jesus invited outcasts into his grassroots movement and challenged established moral and theological standards of his culture, the leaders of his culture regarded his actions as mistakes. The appointed guardians of tradition branded Jesus as a dangerous heretic because he did not practice his spirituality in the “right” way or with the “right” people.

The early followers of Jesus incorporated his tendencies toward inclusion and innovation into the cultural DNA of their movement. These cultural mutations gave that community the independence it needed to survive and thrive after the Roman Empire razed the second Jewish temple in 70CE. Other religious movements survived because they centered their faith and practice in the study of the Torah, rather than the rituals of the temple. These two movements evolved into the religious traditions we now recognize as Judaism and Christianity.

The following questions arise: What creative mistakes are we making in our lives today? How might today’s heretics become tomorrow’s leaders? How might “the creative process working in our midst” be adapting our communities to include new voices and invent new ways of doing things?

“Are these mistakes mutations in religious thought that ought to be destroyed or might they be something else, a new and helpful way of portraying the sacred? That will be determined not by what I am saying. It will be determined only by how you and others respond, by whether these ideas help you make sense of your own experience in living.”

Now
is the space between
what is known and
what is new.

It is a constant
coming into existence.

No respecter
of who belongs
or how it’s done.

Some mistakes
turn out to be correct
and vice versa.

Some heretics
turn out to be prophets
and vice versa.

In the Church today, the instruction I keep hearing is simply to keep moving forward. Do not despise the day of small things. The day of small things is to visit someone in a hospital, to teach a Bible study, or to celebrate the Holy Eucharist — about which a dear friend used to say, it’s never a bad time tohave Communion with Christ. I’m not suggesting the church be like Candide, pretending that misfortune is beneficial or enjoyable. As Christians we have to walk by faith because there is no other alternative. In doing this, we have to draw on the old patterns of fidelity that will fill out the life of the Church in this new social and cultural context. To paraphrase Meyers and Meyers, if this seems revolutionary, it is because there is no turning back. While we don’t get to see what is around the next bend of the Church’s history, perhaps this is because it is not necessary information for us to do the work that is before us.
— Read on livingchurch.org/covenant/2019/03/14/post-exilic-prophets-and-the-church-today/

This article offers a very helpful biblical analysis of the current situation for mainline Christianity in North America.

“Statistics show that church actually isn’t dying. But it is changing.”
Another great article from Relevant Magazine. Worth a read.
A few good lines –
“[T]he church in the U.S. is indeed changing and indeed losing some of its unchallenged dominance over the culture … and I actually think that might be a good thing. My hope is that it will remind Christians that “success” isn’t measured by money or power or numbers, but rather by the fruit of the spirit—love, joy, peace, patience, kindness, goodness, faithfulness, gentleness, and self-control. Where those characteristics are present, the church lives.” – Rachel Held Evans
“Christianity has had a series of revolutions, and in each one of them Christianity has died. Christianity has died many times and risen again; for it had a God who knew the way out of the grave.” – G.K. Chesterton
Click here to read the full article

Thank you all once again for reading, reflecting, and commenting. I’m surprised and honored that an article I wrote for this blog over two years ago is receiving renewed attention. I’m glad to be on the journey with all of you.

In the same vein as A Growing Church is a Dying Church, I’d like to share this article by Joseph Yoo on Ministry Matters. It’s yet another useful tool for pastors and churches as we try our best to follow Jesus:

In a recent sermon, Pastor Andy Stanley stated that every church has a gravitational pull to be a church that serves only its members — a pull to be a church for just insiders. That’s because 100 percent of the complaints, suggestions, critiques, and comments come from people who are already there — already attending the church. The leadership team feels pressure to bend towards a lot of those complaints and suggestions and in turn they become more inwardly focused than outwardly focused. So the church becomes more and more friendly to the “insiders” because we put a lot of effort into meeting the needs of the “insiders.” It’s easy to ignore the “outsiders” — those we’re trying to reach — because they have no voice within the walls of the church. And they have no voice, no suggestions, and no complaints because they aren’t present.

Click here to read the rest of the article